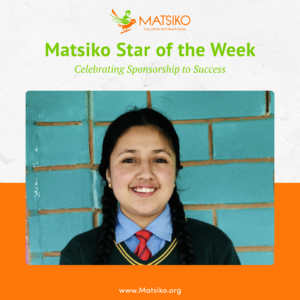 This girl, like all of the Matsiko children, is very special to our hearts. Anjila was in the Matsiko World Orphan Choir that toured the USA before she ever received a sponsor of her own. Anjila was chosen to tour with Matsiko in order to help find sponsors for other children who make up Nepal’s most vulnerable population. Not yet having a sponsor of her own, Anjila still knew the true value and importance of an education.

Then, one day after one of the Matsiko performances someone asked Anjila if she could sponsor a child. When shown the many children available to sponsor, the lady asked Anjila if she had a sponsor. This was something Anjila had always hoped and prayed for. The life changing chance of having a sponsor who cared about her. From this moment on Anjila would work hard to make her sponsor proud.

Because of Matsiko, Anjila sees the value and importance of what she could possibly do for others if given a chance. Now that Anjila has the chance of sponsorship she has a choice to make for her education. Next year she will pick the subject she wants to study at the University. Anjila has decided she wants to become a doctor. Like so many of Matsiko’s children, Anjila also wants to become a doctor so she can help the ignored and forgotten people within her community. She is especially motivated because she and her family were once ignored and forgotten. However she met a person who cared and wanted to change her life. Her sponsor has also changed the lives of her family and the many other forgotten people Anjila will help when she becomes a doctor.

We have found that sponsorship is one of the greatest ways to break the cycle of poverty in over 600 million orphaned and at-risk children.