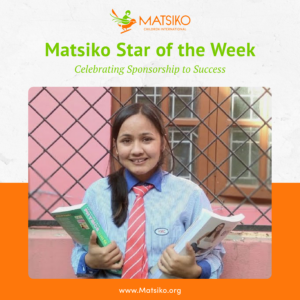 Manjila has always dreamed of something more. As a young girl helping her family sell items on the street to make a living, she always wondered how she could be the one buying the products instead of selling them.

Manjila has always been talented and respectful to others. One day, Manjila heard that there was a program called Matsiko that had a choir for Nepal and they only wanted to work with Nepal’s poorest children. Manjila knew that she was poor, but couldn’t believe that it could actually help her be a part of Nepal’s Matsiko National Choir! Manjila also found out that the program works to find students a sponsor so that they can go to school through their nation’s university. This was a program Manjila desperately wanted to join.

Manjila auditioned for Matsiko’s national choir and made it! A little later, Manjila learned she made the Matsiko World Orphan Choir that would tour the USA. So excited that her life had some hope, Manjila and her family dreamed for more.

While on tour in the USA, Manjila received private schooling and then she found a sponsor! Manjila also learned that she loved computers and how they worked. Once Manjila returned back to Nepal, she went to a very good school and rose to the best performing student in her competitive class!

Now Manjila has graduated from high school and has passed the university entrance exam to study computer science. Manjila actually qualified to study abroad at one of Asia’s best computer science schools. Manjila is so excited that she shared with her family that now, for the first time ever, they can “be the people on the other side buying items on the street as well as selling them!”

Manjila is committed to helping other children who are struggling like she once did. She is hoping to work with a good software company and begin to give back to others the way her sponsors and MCI gave to her!