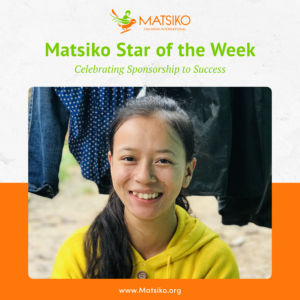 Nisha comes from a hard working family, although they are considered “peasants” in Nepal. For generations, her family has worked hard farming or picking the crops on the farms of others. Because school costs money they do not have, school was always out of the question.

Even as a little girl, Nisha had poor eyesight so seeing was difficult. But, because of the care of Matsiko’s Nepal director, Nisha was able to receive help for her eyes and she eventually found herself a loving Matsiko sponsor. As a result, Nisha did extraordinarily well in school and she attributes her success to being allowed to have “good eyes to see the chalkboard.”

Because of her friendship with Matsiko, Nisha joined the Matsiko Nepal Choir and eventually made the Matsiko World Orphan Choir and traveled to the USA. It was during this tour that Nisha gained confidence and realized that she had the ability to become whatever she wanted to become and break her family legacy, which was trapped in the cycle of severe poverty.

Grateful for her sponsor, and so thankful for her eyesight, Nisha dreamt of becoming an optometrist so she could help other children struggling with their sight. Nisha performed at the top levels of her school class and passed the entrance exam to her nation’s university, where she was accepted to study optometry and become a doctor as an optometrist!

Because of the love and support of Nisha’s sponsor, and through the unique and empowering Matsiko sponsorship program, was this even possible! Nisha is so thankful to her sponsor and to MCI that she has dedicated her life to serving others like her.