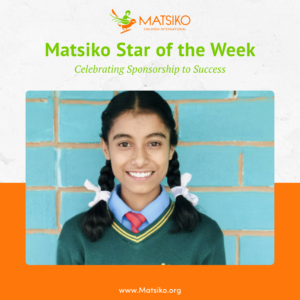 In the poorest countries we serve, dental care is very rare. It is practically impossible for anyone who is in the family of orphaned or vulnerable children, including the children themselves,  to get any type of dental care. If someone within their community gets a toothache, which is very common, they have to let the tooth rot out and subsequently suffer with the pain until the tooth is gone. It is understandable then, that dentists are greatly appreciated within their community. However, these professionals are people who can afford to go to school to focus on becoming a dentist.

Thanks to the generosity of Matsiko’s amazing sponsors Matsiko is able to help break the cycle of poverty in these communities. They provide a means for  vulnerable children to obtain an education and develop lifelong professional skills, which makes a huge difference in the quality of life within these communities.

Take for example the story of Rupa, a child who comes from a family whose entire history is working on the tea farms doing the most difficult labor seven days a week. Rupa too would be a tea farm laborer, just like her entire family before her, if it were not for Matsiko’s sponsorship program and the generosity of sponsors.

Rupa has always been an extremely smart girl who has a wonderful personality. However, because of the severe poverty of her family, she was destined for a life of indentured servitude working on the tea farms. Thankfully, Rupa became known by the Matsiko directors and was asked to be a part of the after school program. Realizing she was a very hard worker and extremely bright, she was placed in the sponsorship program and finally received a sponsor. For the first time in her family’s history, Rupa could go to school. Rupa and her entire family were so thankful for their sponsorship. Rupa was able to attend one of the best schools and competed with some of the most privileged children in her area. Rupa became known for her hard work and really excelled in her studies. Eventually, Rupa was the top student in her class for the entire district. Because Rupa realized she could now choose any profession she made the most incredible decision to become a dentist. Seeing and experiencing the great need for dental care within her family and community, Rupa has focused on one of the rarest and most needed professions for her village.

When Rupa is older she wants to be able to provide this kind of help to other children in need, the same way her sponsor helped her. Rupa’s sponsor made a huge difference in her life and because of the generosity shown towards her she will soon make many life changing differences for others within her community.

Posted in General, Star of the Week