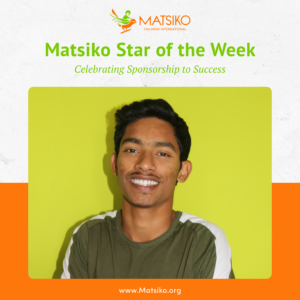 Shivpujan was an orphan living in the streets when he was found by a very caring individual and brought to a child care institution that Matsiko is partners with, where he was raised and encouraged to excel. Shivpujan’s Matsiko sponsor has been very encouraging and has supported Shivpujan so he can succeed in his studies with the hope of becoming anything he wants to become.

Shivpujan is good in his studies. He is a sportsman and enjoys participating in all co-curricular and extra-curricular activities. After his 12th grade exams, which he did well, Shivpujan was so exceptional in sports and fitness that he decided to major at the university in physiotherapy. He took a liking to the varied subjects, but his favorites are biomechanics and exercise therapy. Shivpujan is now seeing that his dream is coming true and he actually can become empowered to afford a life that can include a family and helping others the way his sponsor helped him.