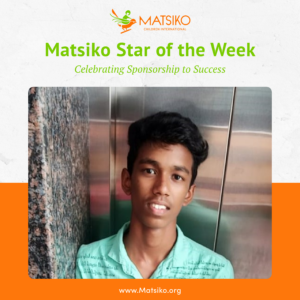 Sinju was 11 years old when his father passed away. As a result, Sujin lived on the streets with his mother and siblings. While Sujin helped his mother and family survive, he often wondered if he could ever live in one of the warm and comfortable homes like he saw other people live in.

Thankfully, a director of Matsiko met Sujin and his family and worked to get them all sponsors. As a result, Sujin was able to have a loving and encouraging sponsor in his life – which changed his life completely! Now Sujin was able to go to school and learn.

In school, he was able to learn many subjects and realized that living on the streets was not the only possible plan for his life or that of his family. Sujin worked very hard in school and excelled greatly over his classmates. Sujin loved math and dreamed of having a profession that involved it.

Sujin was always encouraged by his Matiko sponsor and was allowed to continue in his schooling and excel. Sujin just graduated from high school and performed so well on his university entrance exams that he was accepted to study aeronautical engineering! Sujin will begin his university studies this year and only talks about making his sponsor proud!

Because of his Matsiko sponsor, Sujin will have a future in which he can care for his family and finally live in a comfortable home like the ones he saw others live in when he struggled with his family on the streets.