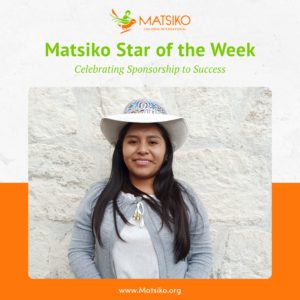 Living in the small Andes mountain village of Yanque, Peru, Ursula was always a quiet girl who kept to herself. Ursula’s family, like most in the village, struggled for work and struggled to provide a consistent meal each day. With no running water and electricity in the house, Ursula’s family life was no different than many others in her village. Ursula thought that she would grow up and be a shepherd girl, picking her meals from the land of others, just like her parents and her grandparents.

Then Matsiko Children International came to her village, offering educational sponsorships for children, like Ursula. Even though Ursula was little, she knew she wanted to be part of Matsiko.

Soon, Ursula found a sponsor. With sponsorship support, Ursula began grade school with the children whose families could afford the fees. Ursula studied hard, was driven, and continued her education all the way through university, graduating with a degree in business administration.

After graduation, Ursula became a Matsiko leader and toured with the Matsiko World Orphan Choir in the USA. Once Ursula returned back to Peru, her life changed in a dramatic way. Helping with a Matsiko service team, Ursula witnessed the Matsiko leaders work to return a trafficked child back to her family. Stricken by what she saw, Ursula asked to go back to university so that she could get her doctorate in psychology and be equipped to help counsel trafficked children and their families, and those who work with Matsiko.

Ursula is now in her last years of her doctorate program, and she is still determined to help counsel, provide hope, and encourage children within the Matsiko sponsorship program, as well as help trafficked children reclaim their dignity.

Ursula can barely talk about why she wants to become a psychologist and almost never speaks of her reasons. When she graduates, however, Ursula is bound and determined, with the strongest of desires, to put her hopes and dreams into action.