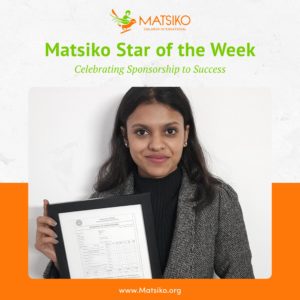 As a young girl, Shivani experienced an event so tragic that she has no memory of it: she witnessed her father murder her mother. Shivani, and her four siblings, were then abandoned by her family and orphaned. Found by authorities, Shivani was fortunate to be placed in an orphanage that would help care for her at a young age.

Growing up, Shivani felt like an outcast because people like her, an orphan, didn’t seem to have a real place in life. In addition to this, she came to realize that she and her family are of the lowest caste in India. Even though the official caste system is banned in India, it is still widely believed and practiced. So this, along with identifying as an orphan, Shivani felt like she didn’t fit in, plus all she wanted to do was to be in school, sing, and perform! Things, at the moment, just out of her reach!

Then, when Shivani was around 8 years old, she discovered that her orphanage was partnering with Matsiko Children International to have their children participate in the Matsiko India Choir. Shivani was so excited about the choir, and was even more excited when she was able to join it! Soon after, Shivani received a Matiso educational sponsor and she could finally start school, attending one of the finest schools in New Delhi!

After doing well in school, and excelling in the Matsiko India choir, Shivani was asked to join the Matsiko World Orphan Choir. During the choir tour of the USA, she was so inspired by her sponsor’s encouragement, and by the people she met, Shivani realized that she wanted to teach other children, like herself, to work for their dreams through education.

Shivani graduated from university with a degree in education and has accepted her first job as a teacher – her dreams are coming true! As a teacher, Shivani wants to help many children work through their challenges and make their dreams a reality through education, just like the Matsiko program, and her sponsor (like you), did for her!